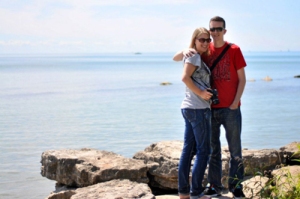 Brits in Toronto feels a warm affinity to Karin and Kieran Ronde because of their blog — K&K Adventures — that they started in January 2012 “as a way to introduce locals and travellers abroad to Canada and the expat lifestyle they’ve come to love!”

So, in effect we’re copying their idea. Fiddlesticks!

But curious as to what brought them to Toronto, we invited them to be featured in Successful Brits in Toronto … and they were game. Right ho, here we go then and over to you, Karin:

Toronto wasn’t so much of a choice for me; my parents moved to Toronto when I was 17. I was still living in Europe and decided to stay there and go to university in England. Because I was a minor at the time, I was given permanent Canadian residency along with the rest of my family.

At university I met Kieran, who was convinced we should take the opportunity of my residency and move to Canada when I’d finished my studies. Once there, I could sponsor him and he could get residency too. We planned to move permanently … although recently have been talking about looking at other cities in Canada because job opportunities may be better elsewhere.

When we both first moved here in April 2011 I was fresh out of university and knew that it was a bad time to be a recent graduate looking for a job. Kieran and I both worked for six months at my parents’ fishing lodge in northern Ontario. It was bliss, totally remote and peaceful.

After we finished for the summer we were both still scared to move to Toronto and look for work. We went travelling round south east Asia for two months instead!

When we came back we jumped right in and I was lucky enough to get an interview with a Canadian who grew up in Bali. We spent the whole interview talking about my recent trip and she gave me a call the next day with a job offer.

Kieran was not so lucky. It took him the best part of a year temping, and looking for work before he found his current job.

From a job-hunting perspective we both have had struggles with agencies, and find them beyond frustrating. I moved to another company recently and it took me four months of searching and interviewing before landing a job that I can truly say I love. Every industry here seems very competitive and it can be difficult to get an interview.

That being said, Toronto is a wonderful place to live in. We live in midtown, by Forest hill, and as neither of us have lived in a big city before, we are still struck by how much we love being close to the subway, having a grocery store next to our building, and the speed of which we can get anywhere in the city.

We also love the constant stream of events and activities we can enjoy living in the city. Toronto has a thriving music scene, many quirky bars and tons of beautiful parks to explore.

There are activities for everyone in both winter and summer, and Toronto is close enough to mountains for winter sports, and lakes for summer ones. Really there is no excuse to not be outdoors, and we both really enjoy that aspect.

When we first arrived we went on Meetup.com and found the Brit Meetup to be a fantastic place to make new friends. We participate in their bi-monthly pub quiz when we can, and really enjoy it. In terms of pubs I would say Scallywags at St Clair and Yonge always has a British crowd as well as the Football Factory on Bathurst.

My advice for anyone moving to Toronto is to get out there and experience all that the city and surrounding areas has to offer. The scenery north of Toronto is breathtaking and in any season you can find something to do.

Don’t be afraid to explore all of Toronto’s neighborhoods too as they really are so diverse, and look out for street parties and festivals like Taste of the Danforth or Salsa on St Clair.

1 thought on “Successful Brits in Toronto: Karin and Kieran Ronde”