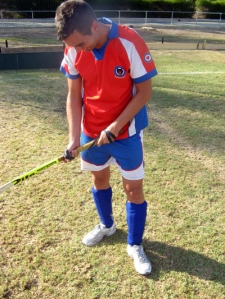 “Nah, stop it mate. Yer cracking me up, seriously. Ya silly old sod.”

We’re a little bit confused about Paulo Antunes. A little perturbed. His Twitter profile shows a proud photo of Winston Churchill; he’s a Londoner living in Toronto; Lisbon is randomly thrown in there; and he appears to support Arsenal.

Anyway, on with the show:

It’s actually something of a fairy tale, how I have ended up in Toronto. In 2000, whilst on a family holiday to Portugal, I met a very pretty girl with an “American accent.” We spent lots of time together and had lots of fun; however, as with all good things, our time came to an end.

Turns out she was from a place called Mississauga, which I had never heard of before. Arrrhhh, young love. We exchanged letters as well as kept in touch through Yahoo messenger, before eventually losing contact.

Fast forward almost a decade, I found one of the letters she had sent me, at my parents’ house, and I decided to look her up on Facebook (the gems of modern technology). After hours upon hours spent on Skype and x number of long-haul flights, I took the decision to up sticks from my beloved London, to move to this side of the pond … and what a decision it was … as I now call this girl in question my wife! Love you Ashley!

I knew I was coming to Toronto well in advance of actually landing on these shores — I initially applied through a BUNAC working holiday visa which enables you to work for up to two years — so it took a lot of pre-planning. I was fortunate to pre-arrange some interviews, landing myself a retail job in Dufferin Mall within the first two weeks of being here.

This was always going to be temporary for me. I spent most of my spare time learning to cross the road — they are huuugggee — pay for items in shops using cash — loonies/toonies etc., my oh my — and generally just familiarizing (see what I did there? “z”) myself with Canadian culture, as well as applying for a minimum of 10 jobs a day … a lot more difficult then it seems.

Once again, I was blessed by the Big Man above, and in just over a month I was employed at a great organisation, which reports directly to the government — and helps save the environment. Hard work and perseverance pays off in the end!

Toronto is 3,548 miles (or 5,710 kilometres for those Canadians) from London. That’s quite some distance from my family … therefore, the worst aspect.

The best aspect — after you have taken in the initial, “Wow, this is surreal” after walking out of Dundas subway station in the centre of Toronto for the first time to be greeted with a flurry of lights, and surrounded on all sides by massive skyscrapers — is the true diversity and friendliness of the city.

Personal favourites of mine include the Canadian mentality towards all holidays: I love Christmas, and it is well celebrated here. Another thing is the close proximity from Toronto of many different activities — camping in Algonquin in the summer, wine tasting in Niagara in the autumn and skiing at Blue Mountain in the winter. So much to do. And of course, at the very top of everything, is my beautiful wife and her wonderful family!

I am actually a Toronto representative for an England football supporters initiative (The Official England House on Facebook) which covers the whole of Canada, and as a result, I am meeting a load of new, like-minded people. We are hoping to establish a venue in Toronto as a regular base to watch England games at together, as well as other social events. Plans are in the works. Meanwhile, as a massive football fan, the Fox and Fiddle on Yonge/St. Clair is great to watch games — especially as it is home to the mighty Arsenal!

I am also lucky that a Mancunian friend of mine from university actually spent his second year studying at Ryerson on exchange, and funnily enough, he too was enticed back by a lady friend. He was the best man at my wedding.

I am also part of this group called the Toronto Brit Meetup Group whom send me loads of e-mails to events such as pub quizzes, etc., but I am yet to attend anything. Soon enough I will though!

Embrace your British roots, whilst keeping open-minded about Canadian culture. Toronto is especially very multicultural, so much to experience, and they do love their Brits. If ever you are feeling lonely and cold out here … don’t! Plenty of us have taken the plunge also, and we are here for you to help you settle and find your feet!

Excellent stuff, Paulo — thank you. Seems you have a great life here! If anyone wants to connect with an Arsenal fan, you can check out his Facebook page, Little Britain: Toronto.