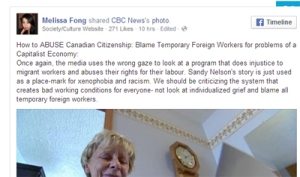 How to ABUSE Canadian Citizenship: Blame Temporary Foreign Workers for problems of a global Capitalist Economy

Commenting on a story on CBC News (Saskatchewan) — Waitresses in Saskatchewan lose jobs to foreign workers — the blogger opens up her post by commenting:

“Once again, the media uses the wrong gaze to look at a program that does injustice to migrant workers and abuses their rights for their labour. Sandy Nelson’s story is just use as a place-mark for xenophobia and racism. We should be criticizing the system that creates bad working conditions for everyone – not look at individualized grief and blame all temporary foreign workers.”

Brits in Toronto did a little digging and, according to the Canadian Government’s website explaining the Temporary Foreign Worker Program, “Economic Action Plan 2014 proposes to invest $11.0 million over two years and $3.5 million per year ongoing to strengthen the Labour Market Opinion process to ensure Canadians are given the first chance at available jobs.”

Will be an interesting issue to watch. Thanks Melissa for the initial blog post that caught our attention.