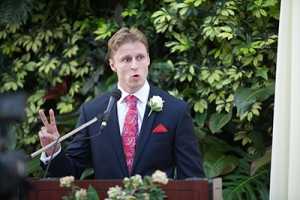 “Yeah, I know, couldn’t believe it either. Four minutes into stoppage time and he bangs two in.”

It’s a relatively balmy Sunday night in Toronto so we thought it’s time to feature another successful Brit in the city.

Give a warm Brits in Toronto “ello mate” to Adam Straker who is a Relationship Manager at the Toronto Region Board of Trade.

It was an easy decision. My Canadian wife and I met while she was living in London, England. After we got married, she expressed an interest in returning to Canada and the rest, really, was a no-brainer.

I’m sure that my lack of “Canadian experience” was a factor in some of my job applications but it all worked out brilliantly. I had an entire summer to relax and really think about the type of job that I wanted. In the end, I found exactly what I was looking for — and it’s everything I hoped it would be!

Best? Toronto’s diversity, energy, friendliness and spectacular sunrises/sunsets! The grid system and compass needle-like CN Tower are also great for people like me who have a rubbish sense of direction!

Worst? Right now, I can’t see past the winter winds! They are … exhilarating!

I meet a lot of people through my work and find myself connecting with Brits on an almost daily basis. Some moved here recently while others have been here for decades and we always have a splendid time comparing notes. In all cases there seems to be an instant fellowship of Britishness with the other Brits in Toronto.

There are loads of British-themed places around the city (The Queen and Beaver on Elm Street is great and has a Man United shirt, signed by Ryan Giggs) but it’s impossible to replicate the stickiness of beer-soaked carpets, the stench of stale cigarette smoke or the faint feeling of triumph that you experience every time you get served at a crowded bar.

You have to get to know your city. Work hard, network (the Board of Trade is a great place to do that), take long walks, read the newspaper and get involved. You’ll be welcomed with open arms!

Thanks Adam, seems like you have a great life in Toronto!