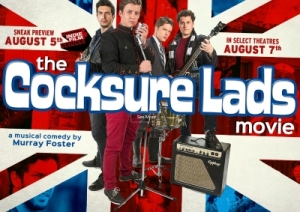 They seem pretty sure

The Cocksure Lads followed us on Twitter so we checked them out and discovered a new film coming out on August 7 (sneak peak on August 5) … here are the screenings.

From the website: “The Cocksure Lads, a band from England, come to Toronto on their first-ever North American tour. Ten minutes after arriving, they get into a fight over royalties and break up. The Lads scatter across the city, and spend the day drinking, fighting, meeting girls, falling in love, and searching for a claw-foot bathtub. Through it all they learn what it means to be a band — but can they patch things up before their big show that night?”

Sounds like a typical night for the Brits in Toronto crew. Except that we don’t play in a band or have a claw-foot bathtub. Anyway … take a butchers, it looks great!