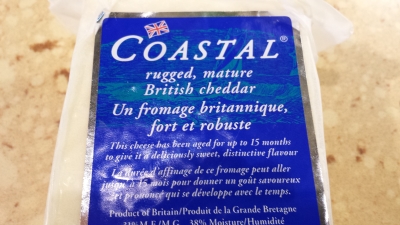 When Nancy — our Brits in Toronto office accountant — heard that we were testing out something “rugged” and “mature” she got a little flustered. A tad disappointed when she found out it was just a “hunk” of cheese.

Nancy tutted a few times and went back to cutting and pasting our Thank God It’s Friday, Let’s Go Out On The Lash slush fund from column A to column C, minus column B.

The Brits in Toronto crew love rugged cheese. In fact, the ruggeder the better. This could be one of the ruggedest.

We want our cheese to climb the snowy mountain during a blizzard and rescue the stranded puppy, help the old lady across the road and still have time to take the Aston Martin for a spin to buy those tickets for the Las Vegas lost weekend that we all have in us. Before lunchtime.

Coastal Rugged, Mature British Cheddar fits the bill. Sourced from Whole Foods, this is the kind of cheese that when you cut a slice and stand it up, the crumble factor makes it bend and snap halfway.

Aged for up to 15 months, it has a nice tartness, but not overpowering. To be fair, it’s not the strongest cheddar we’ve ever had … but this could be the cheese to ease your nervous processed-slice-in-a-plastic-sheet-orange-cheese-loving friends into the world of stronger flavours.

You could be their Cheese Whisperer and allow them into that arena of mature cheddar.

We think it could be very versatile. Coastal Rugged, Mature British Cheddar will sit quite happily atop a slice of toast (grilled and bubbly) or astride a baked potato. Shred that bad boy, chuck it into a lettuce and avocado salad and get the party started. So many options.

In summary, we give this British cheese a Brits in Toronto 4/5 stars.