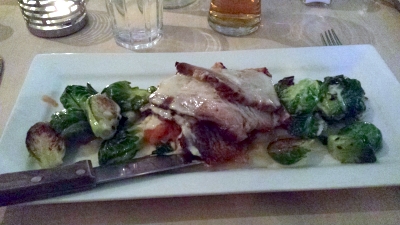 Get in mah Belly of the Borough!

The Brits in Toronto crew treated ourselves the other week to some proper British grub at The Borough over on the Danforth. That’s in the Greek manor.

We’d heard some good things so wanted to check the place out. The Borough bills itself as an, “English-style gastro pub, which specializes in local sustainable food, beer and wine.” We like to support the local community, so agree with their ethos.

First things first. We think this place leans more towards a restaurant, than a pub. It’s not huge — we estimated around 30-40 seats — but has a nice cosy feel to it, and a good buzz when busy, like the night we went.

It’s a plus point for us when you can see the chefs cooking your food, as you can here.

I started with the curried kale soup, which was on special. It was very nice, but thought the curry flavour was a little on the low side. Wasn’t looking for more spice … just more curry factor. Delish though.

The star of the show though was the Belly of The Borough: roasted pork belly served with horseradish cream sauce, Brussels sprouts and bashed winter root vegetables.

Some people hear the term “Brussels sprouts” and shrink away in horror, mewling in fear and loathing — but they need to try these for an education. Slightly charred and dipped in the horseradish cream sauce, these are sterling.

Pork belly can sometimes be too fatty and sickly, but The Borough has done theirs proper. It’s a good portion of meat that is simply delicious. (A few of the Brits in Toronto crew had their forks in there too to try it.)

There’s weekend brunch too if you fancy getting your laughing gear around such delicacies as a big and smaller fry-up — thus entitled the Borough Full and Proper and the Proper But Not So Full — or the Full English Breakfast Burger which does exactly what it says on the tin and is a full English brekky atop a burger. Simple … but brilliant.

We will most definitely be back for that bad boy, and give The Borough a Brits in Toronto 5/5 stars.

2 thoughts on “Totally biased product review by me — The Borough”