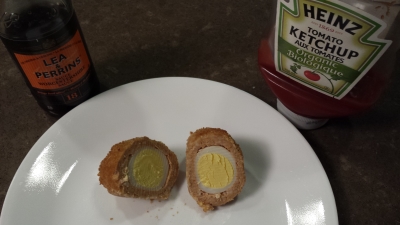 Just a serving suggestion. No one would put tomato ketchup or Worcestershire Sauce on a Scotch egg, right?

We actually knew this fun fact about the origins of the Scotch egg — it was a question on University Challenge once — but just had to double-check it: “The London department store Fortnum & Mason claims to have invented Scotch eggs in 1738.”

For those who don’t know, a Scotch egg consists of a hard-boiled egg wrapped in sausage meat, coated in bread crumbs and baked or deep-fried. Sounds delicious, right? We agree.

So we’ve been on a quest to find the best Scotch egg in Toronto. While wandering around Loblaws, we happened upon their Scotch egg in the prepared meals and deli section, nestled between the beet salad and kale and cashew mix. So we decided to give it a go.

First impressions — and a friend told us that size doesn’t matter — is the Loblaws Scotch egg is pretty small. We understand that the egg is the defining component, but feel there could have been a thicker layer of sausage meat wrapped around it.

Maybe we just remember the Scotch eggs when we were younger, enjoying them at sunny picnics with a glass of weak, warm Ribena … and they seemed much bigger back then.

The egg itself was OK but we would have liked more seasoning in the sausage meat. It was a tad bland. The bread crumbs didn’t do much for us either.

So, sorry Loblaws, but we are still on the hunt for the perfect Scotch egg and give yours a disappointing Brits in Toronto 2/5 stars.