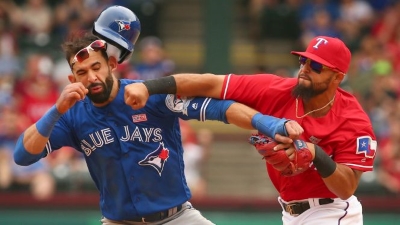 We don’t profess to know much about baseball, but we do know that we chose to live in the City of Toronto, and thus, by default, support the local teams.

One of those is the Toronto Blue Jays and they did bloody brilliant last night in a tight game that ultimately finished in a home run to take them to the next round against the Texas Rangers. (They don’t really get on, as the photo above shows.)

We were all here last year and the campaign really brought the city together, so looking forward to the same buzz this time around.

The first game in that series is TOMORROW in the afternoon, so book a *cough* “dentist” or “doctor” appointment now.