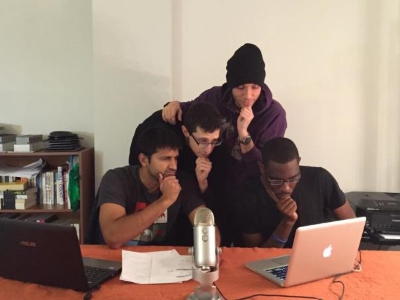 Left to right: Rishay, Alexander, Mohaned and Bernie ponder over some top-notch banter in the Coshcast

Back in March 2015 we started a series of articles themed, “Behind the scenes of …” with the aim of finding out what goes into particularly British things. We profiled a fish and chip shop and then never did another one for some reason. Until today!

We found these lads and really liked the cut of their jib. They are passionate about the beautiful game and created a brilliant football blog called Under The Cosh and weekly podcast called the Coshcast to back up their knowledge and opinion. It’s very funny.

There’s a Brit in the group — Alexander — so we sent an e-mail and probed him harder than Sergio Aguero in a West Ham defence. Here’s what he told us about running a football blog and podcast …

Firstly, why the name Under The Cosh?

“Under the cosh” is a phrase used only by British commentators. Admittedly, not many people here know what a cosh is, but they tend to love the phrase once explained to them.

If I recall correctly, a couple of other candidates were “Into Row Z” and “Two Banks of Four,” but given we do a podcast, the “Coshcast” just seemed too perfect.

Please introduce yourselves, where you are from and how you got together? Any Brits in the team?

There are four of us: Mohaned (Egyptian), Rishay (Indian), Alexander (British) and Bernie (Nigerian).

All of us are Canadian citizens but also Anglophiles at heart due to our long-held love and interest in English football as well as growing up in British colonies (all is forgiven). Only Alexander is a true home-grown Brit though, growing up as he did in North London.

We all moved to Toronto in 2006/2007 for school and attended the University of Toronto. That’s where the group was formed, though we didn’t start the website and podcast until 2013 after we’d all graduated. The four of us now work in different industries but football runs our lives.

We actually bonded over the shared experience of dragging a laptop over a sleeping significant other at 7:00 a.m. Canadian time in order to watch a noon kickoff in the UK. Pretty sure that’s a standard British expat experience now.

How much time a week do you put into creating content for the blog?

The podcast is the one constant recurring chunk of time on a weekly basis. With the preparation for it, the travelling to get together, recording, editing and uploading … I’d say we spend about seven hours a week on that.

After that there are the articles that we publish — whether original or submitted by guest writers — and writing or preparing that content for publication is probably another four or five hours a week. Of course, there’s also being on Twitter all the time …

How do you decide what you’re going to chat about on that week’s Coshcast?

We have categories that we almost always cover; the English Premier League takes up half the podcast, with the other half split between news from the other major European leagues, a Toronto FC update when MLS is in season and two lighthearted segments: the football quiz which is named after a new player every week (Quiztophe Dugarry, Santi Quizorla etc.) and Mumu of the Week.

“Mumu” is a Nigerian pigeon slang word that Bernie taught us, meaning “fool,” “idiot” etc. So for Mumu of the Week we find the funniest or most ridiculous off-pitch stories from the world of football and have some fun taking the piss.

Last week for example we had a right laugh at Ryan Giggs for claiming that Swansea couldn’t match his ambitions, and a Norwegian manager who wants to use sperm from Zlatan Ibrahimovic and Cristiano Ronaldo to produce a world-beating team in 20 years. You can’t make this stuff up, Clive.

In May, I believe, we plan on awarding the season’s biggest mumu the Bellend D’or.

Preparation goes on throughout the week, though. We have a Google document that acts as the agenda and we fill it up as the results and stories roll in.

Obviously Brits love football, but what kind of reaction do you get from your Canadian audience to the beautiful game?

The local appetite for football coverage is definitely growing and we know that a good portion of our reader and listenership is Canadian, which is great … but of course there is still a huge difference between here and the UK.

In Toronto I am still surprised and delighted if I overhear a conversation about football, whereas back in England it’s just innate and constant. What we’re trying to do is provide the level of depth, passion and humour with which the game is talked about in the UK to the Canadian “market.”

I think there’s some quiet dissatisfaction with the mainstream coverage of the sport here. The level of debate, analysis and even personality or humour that you get on Canadian TV leaves a lot to be desired. Craig Forrest seems like a lovely bloke but, let’s be honest, it’s the West Brom of punditry.

That said I suppose we can always be grateful that Sportsnet haven’t hired Robbie Savage or Michael Owen yet.

The Canadian football-supporting scene is a fascinating one. Given Canada’s urban diversity, a lot of people move or grow up here already supporting teams from elsewhere.

For example, the Canadian-Italian community has a great presence online that is very strong on its support both for Toronto FC and for various Seria A clubs, or if you go to a Toronto Arsenal Supporters Club event you’ll find a group of passionate young people with truly global backgrounds.

I think our content probably speaks most to this urban population who grew up with the Premier League or European football but are also pleased to have a local team to support.

Equally there is a base of Canadian national team(s) supporters who have fought hard for a long time to promote and popularize football in this country, and support for Toronto FC has been first class from the club’s first day with the stadium packed full of people desperate for local football.

We would dearly like to produce more content aimed at Toronto FC and Canadian national team fans but it’s a question of hours in the day. Our first love is British/European football and we’re always likely to have more fun discussing the expansion of Steve Bruce and Troy Deeney’s waistlines over the expansion of MLS, as sad as that might be. 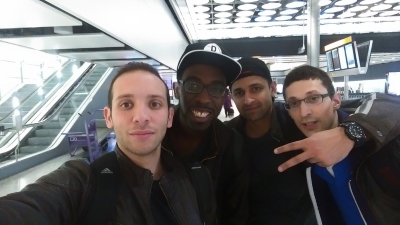 Spill the beans on your upcoming Football Trivia Night. And do you organize any other social events for Brits or football lovers to hang out?

We’re really excited about this! For a couple of years we’ve thought that a football trivia night would be fantastic, so we’re looking to merge the traditional British pub quiz with Toronto’s massive appetite for trivia and our perceived encyclopedic knowledge of the beautiful game.

We’re working on questions that will make this a lot of fun but also a really good challenge for those that reckon they know their stuff. We’ll cover the Premiership, European leagues, World Cups, we’re planning visual rounds and “identify the commentary” sections. It should be a good laugh!

The first event is taking place upstairs at Betty’s (King and Sherbourne) on Wednesday, November 2 from 7:00 p.m.-9:00 p.m. It costs $10 to play, we’re aiming for eight teams of four and there is a substantial cash prize for the winners! Betty’s has a good beer selection and food too so I can’t think of many better options for a good evening.

You can sign up on the Facebook event or, if you don’t use Facebook, feel free to send us an e-mail at underthecoshblog AT gmail DOT COM.

We’re putting the night on in partnership with OpenSports which is a great, locally-designed app that allows you to create or find and join games of pick-up football (or many other sports) going on around Toronto.

Feel free to tell us anything about Under the Cosh or running a football blog that Brits in Toronto readers should know.

If you’re a Brit in Toronto and into football then we strongly believe this blog is for you. We cater to the Premier League as already mentioned, but are also supporters of the local side Toronto FC. The club couldn’t have grown in the way that it did without the support of British expats who set the tone for football fandom here.

We also aim to highlight football at a grassroots level and the main players in that area. We’ve interviewed former players like Paul Stalteri, Nolberto Solano, Danny Dichio, Kanu and Bruce Grobbelaar who are all invested in youth development in Ontario.

All in all, running a football website and podcast is the best thing we’ve ever done. It led us to travel to Europe on a football pilgrimage that we documented and we’ve met legends of the game. Well worth it.

All feedback is welcome and if there are football-related events you’d like to see happen in Toronto, get in touch and let’s talk about making them happen.