Here’s his latest thoughts on Brexit and pensioners in Canada who receive the UK State Pension. All views are the CABP’s and Brits in Toronto does not endorse them and is not held liable in any way. As always, do your due diligence.

I was recently speaking to my octogenarian friend James the other day (you may remember that I first introduced you to James in the Ouch! How Brexit is hurting UK pensioners in Canada and in the later article James and I go to London), and I said to him what a quintessentially European phrase, “Nothing is agreed until everything is agreed” really is, although its origins seem to come from the World Trade Organisation (WTO) in 2005.

What has this got to do with the UK State Pension which is what James and I always end up talking about? You see, he is a British military chap and he is usually found frothing at the mouth because he has found out that if he had stayed in the UK rather than retiring here to Canada he would be more than £31,000 better off in terms of his UK State Pension; using historic exchange rates, this converts to over $56,000 — not a trifling amount by any means. 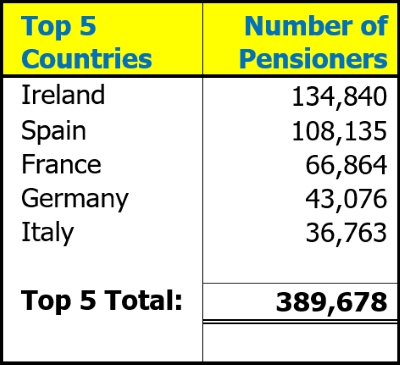 Source: Dept. of Work and Pensions

Once the UK drops out of Europe, then, technically, the UK government no longer has a legal obligation to continue giving these pensioners the annual inflationary increase. This year the increase is 3%, so, for anyone getting their UK State Pension based on the pre-2016 Pensions Bill, this means an increase of just over £190 per year. Those who have retired after April 2016 will receive up to an estimated £260.

These pensioners are not happy about the possibility of them losing the annual increase, and there are a number of European pension lobby groups who are petitioning the UK Parliament.

The European Parliament and the UK Government have agreed that the UK government will continue to “export benefits” which includes the annual increase to the UK State Pension, and that has been drafted into the Withdrawal Bill which is currently before the UK Parliament. This is fine as long as the Withdrawal Bill is enacted.

However, Brexit negotiations are currently getting bogged down with negotiating a trade agreement. If the negotiations are not all completed by March 27, 2019, then the UK could fall out of the EU, and the Withdrawal Bill could be in limbo. So, where would this leave the pensioners living in Europe who receive a UK State Pension?

There are 540,000 pensioners living in 120 countries who do not receive the annual increase to their UK State Pension (larger image):

As you can see, Canada is one of those countries (where there are 144,000 “frozen” pensioners). The pension lobby groups that I represent are watching very carefully to see what Brexit delivers in terms of the annual UK State Pension increase.

Technically, the pensioners living in Europe will be joining all the other “frozen” UK pensioners in the world, and the number would then swell to over one million unhappy pensioners — not a pleasant sight!

The UK Government has said that as part of the Withdrawal Agreement, they will negotiate “bilateral agreements” with European countries such that the pensioners living in Europe will continue to receive their annual UK State Pension increase. What James and many others are asking: “Why them, and not us?”

If you think that you are going to be affected by the UK “frozen” pension policy, and would like to help us in our fight, please check out the Canadian Alliance of British Pensioners and they may be able to help you …

Where do you stand on this? Nigel can be reached: