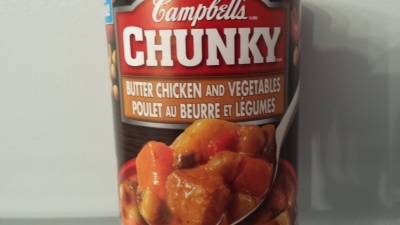 Heaven in a tin? If you’re too lazy to read the review, no

Was wandering around Loblaws at the weekend looking for the organic alfalfa sprouts section when I spotted two words on a tin that shouted BUY ME! Butter Chicken … soup. With veggies thrown in to make it a balanced meal. Sold!

Noticing that this soup was part of the famed Chunky range I hoped that the contents would live up to the lunchtime legacy — but, alas, not to be.

It wasn’t really a soup, per se (by or in itself or themselves; intrinsically), but more of a gloopy stew. It’s the kind that when you heat it up on the cooker, heat bubbles get trapped under the surface until they force their way up and explode out of the saucepan, like a butter chicken stew volcano eruption.

Had a quick sniff and — yes — it smelled like curry. More like a Mulligatawny soup actually, the kind that the Canadian government still won’t let Brits bring into the country from back home. But we’ve started a Twitter campaign to right that travesty!

Taste? Too tame. Butter chicken is on the mild end of the “sweat and blow your nose” spectrum but I was hoping for a touch more spice.

The vegetable-to-chicken ratio (VTCR) seemed too high and the “Chunky” bits of chicken were very small and a little tough for my liking. It did fill me up though, so that was a bonus.

Bit disappointing when all is said and done. Unfortunately have to give this curry product a Brits in Toronto 1/5 stars.