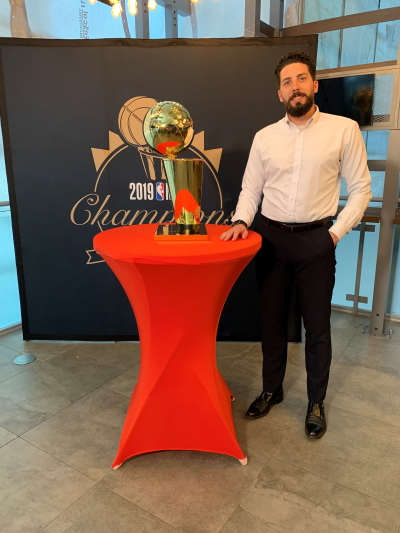 If you attended the recent Brits in Toronto and TFC British Heritage Night, you would have spotted a very tall bloke strolling around, looking down and surveying all in his BMO Field kingdom.

That would have been Jake Wyatt who came up with the idea in the first place, roped in all the local Brits in Toronto looking for some free PR on the back of a Championship-winning Toronto football team and the rest is history.

Since then we’ve had about five e-mails from people with the same surname Wyatt, which is really a coincidence, asking us to feature him as our latest Successful Brit in Toronto.

My journey towards living in Canada/Toronto has been interesting. I grew up in England playing basketball. I was a 6’4 lanky teenager and found my way into a local basketball team. Turned out I would fall in love with the game and decided to take it serious and ended up playing at a decent level.

At the age of 18 I left England to move to Iceland and play for FSU basketball team/ youth academy in the Icelandic town of Selfoss.

After spending one year in Iceland, I was offered a position with an American college basketball team in Pennsylvania. I graduated four years later and attended Grad School in Montgomery, AL. It was here that I met my Canadian wife Paige who was a fellow international student studying at a local college.

So yeah, long story short fell in love with a girl and here I am and couldn’t be happier!

I was lucky, I found out at an earliest age that I wanted to work in sports and I enjoyed selling; sports sales was a natural fit. I had some great mentors growing up who encouraged me to get as much experience in sports business as possible and I was able to do several internships/entry-level jobs in the industry. Once my wife and I decided Canada/ Toronto was going to be home, I started applying for jobs in my field.

Timing worked out and a job became available at MLSE in sports sales. I had decent experience working in sport business with a few different teams in the states and back in England — I also had a few connections in my network that helped me with references here at MLSE.

I applied for the position, and after a long process, battling with Skype interviews and time zones, I landed the job. I was still in England at the time, so was one of the lucky ones who had a job lined up as soon as I landed in Canada.

I love living here in Canada and being in this city. I had been lucky to travel at a young age. For me Canada/ Toronto is the perfect mix of England and USA.

The people here have a genuine friendliness to them. I loved my time in America, and met some great people who are now lifelong friends … the food, big roads, and American dream spoke to me!

However, as time went on I found people/relationships in the States (especially the south) can be service level. At times, when I was in the States I found myself missing the English greeting at a local pub — where you walk in and the bartender starts pouring a pint of Fosters, slams it on the table and sticks their hand out for the four quid you owe them, make some joke about your chosen attire, then proceeds to ask how your day was. Sounds strange I know, but I missed that when I was in the States; I found the “You’re Welcome/My Pleasure” interactions a bit false at times.

Here in Canada, I find the people are genuine and more able to keep up with the English banter, it’s a welcoming country of diverse people, but still has the “Canadian Dream” element. I find Canada welcomes people to be themselves. With such a wide range of cultures I have never felt the need to act or behave “Canadian” … instead, I find the country encourages me to be the best version of myself and add to society that way.

The toughest part of being here is distance from family and friends in the UK. I don’t feel homesick, but it is hard not being able to pop round and see family on weekends and having to allow for the five-hour time difference when communicating with friends and family back in England.

On the plus side it is always nice to visit home during holidays and host friends and family when they want to come out and visit.

Since being here I have been surprised to see how big the “Brits In Toronto” community is. It is always nice to bump into fellow Brits and talk all things from pubs to English fry ups!

I recently worked with this blog and a number of the other English social groups to plan a Brits In Toronto event at a Toronto FC game. The event was great, and lots of people at the event were surprised with the standard of football this side of the pond.

Sorry, the salesman in me is coming out here … but attending TFC, Raptors and Leafs games is a great way to feel connected with the city and meet people; I have bumped into several Brits, especially at TFC games.

I am in a lucky position to sell a product I believe in. If anyone is interested in Toronto FC ticket packages or wants to meet up at a game please do reach out and contact me at jake.wyatt@mlse.com or 416-815-5400, ext. 3072. We have also set up a discount code with Brits in Toronto: click HERE and use the promo code “BritsInToronto” — this will get you up to a 25% discount on TFC tickets.

Okay sales pitch over! But to answer the question, yes I have made an effort to connect with fellow Brits and I am looking forward to continuing to do so in the future!

My advice would be to embrace your British roots but also accept that this is Canada and this is your home. This website and other groups on social media are a great way to stay connected with the British community.

But get involved in living in Canada — meet people, explore, and learn from different cultures. This city has so much to offer, from food, to festivals and professional sports teams. I still get the buzz when driving into the city, especially at night.

This is a special place and be sure to not become numb to the city. Remember the feeling of first being here and make a conscious effort to hold onto that feeling.

Oh and wear as many layers as possible in the winter, it is bloody freezing!

Thanks Jake. Didn’t notice the sales pitch at all, mate. If anyone wants to connect, here’s his LinkedIn profile.

Fellow Brit in Toronto Andy Hedges reached out to Brits in Toronto for help in getting the word out about a company he works for called VFX Financial, so we said we’d give it a quick plug. Here’s the details …

Anglo Canadian currency specialists VFX Financial have provided Brits in Toronto readers with an extra special rate for their currency needs. So whether you are already based in Canada and need to send money overseas (not just to the UK,) or you are in the UK and need some loonies, VFX Financial can help.

To benefit from the special negotiated rate, during the sign-up process, simply enter the word “Brits” as the intro code. You can e-mail Andy for more info too at brits@vfxfinancial.ca.

That’s about it, really. Full disclaimer: do your own research on all the above before signing up, Brits in Toronto cannot be held responsible for your dealings with the company and no money changed hands for this post, it’s purely for informational purposes. 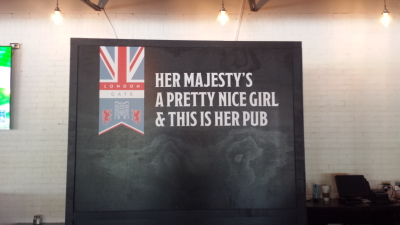 Brits in Toronto has been searching the city for nigh on 19 years and counting for the quintessential proper authentic “British curry” and has — thus far — come up short. And we’ve been to a LOT of curry houses in and around the GTA. (A couple have come close if you look back at some of our totally biased product reviews.)

That may have changed yesterday when we checked out the London Gate British Pub. According to the owner and head chef, Harry — a Yorkshireman who lived in Scotland for 20 years before moving to Ashford, Kent and who has cooked in a lot of Indian restaurants — wants to bring that real British curry taste to Toronto.

First things first. This is a little off the beaten track at Eglinton Avenue West and Renforth Drive. Harry says they will be on Skip The Dishes at some point.

Secondly, it doesn’t look like a British pub from the outside so you may drive right past it. There is a Guinness sign outside to clue you in. Plus lots of parking.

The space is HUGE with a patio, pool table and semi-private room that can presumably be booked for events. 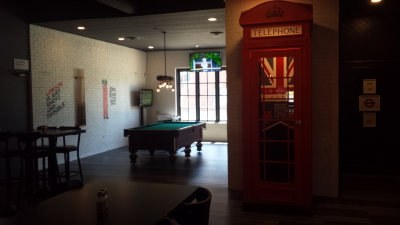 So, food and drink I hear you ask? Here’s the tap list. Pretty impressive. We sampled the Honey Dew and it was very nice.

The bangers and mash with caramelized onions and gravy was also good, but lost points because Canadian baked beans were used instead of British-style baked beans. Harry explained that they are too expensive. We countered that they are now freely available in Canada and maybe can be included as an optional side for an extra dollar or something. Harry rubbed his chin and looked thoughtful at that suggestion, so stay tuned.

The kicker was the Yorkshire Pudding wrap with garlic aioli, mixed cheese, caramelized onions, cranberry sauce, mashed potatoes, drizzled with gravy and served with fries. Choice of protein: chicken, sliced roast beef or soy. (Lots of veggie and vegan options here too.) This was a very large wrap so come hungry. It’s like a roast dinner wrapped up on a plate! 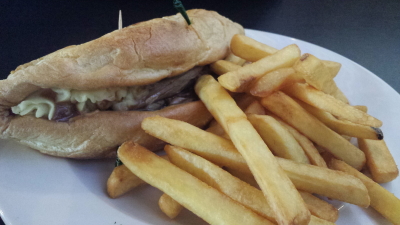 So, we got chatting about the curry options on the menu at that point. There’s tandoori chicken flatbread, butter chicken rice bowl, English curry and chips and chicken tikka naan. Harry was kind enough to bring us out a sample bowl of the butter chicken and it was delicious. No oily ghee, not greasy. Just a really good flavour. (Ate it too fast to snap a photo.)

BREAKING NEWS! Saved the best till last. You know when you’ve had a few pints and really crave a doner kebab? Not shawarma … or gyro … but a real doner? Well, Harry is putting those on the menu soon too. And we tried his house-made red sauce, the real stuff that is hard to get here. It is excellent. We were eating it with a spoon and wanted more.

So, find a designated driver and head to London Gate. We give it a Brits in Toronto 4/5 stars. (Harry — please introduce the doner and offer British baked beans and we’ll have a chin wag about the coveted 5th star …)