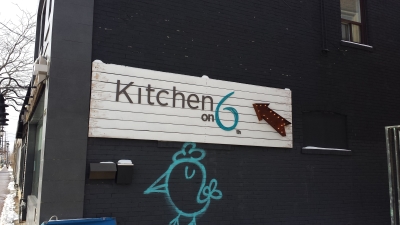 Here we are … and there’s a graffiti Twitter bird too

Dreaded tackling the last-minute (like me!) Christmas shoppers today so just had to have a British-style brunch to set me up for the parking battles ahead. And what better place than the New Toronto location of Kitchen On Sixth?

I normally wait a few days before posting my totally biased product reviews, but this one has to go up NOW and you’ll find out why at the end*. 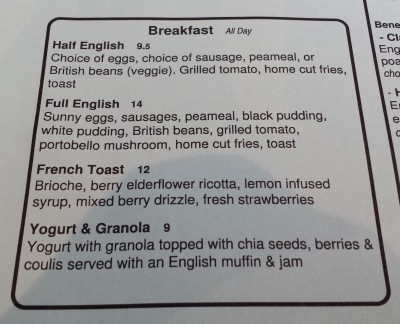 Half or full, Canadian or lighter?

Here’s a snippet of the menu above. Usually I’m all over the full English breakfast, but because I can buy British-style beans quite easily now, it’s not quite the hook it used to be on menus. But I was dying for some black pudding and thus formed another plan … 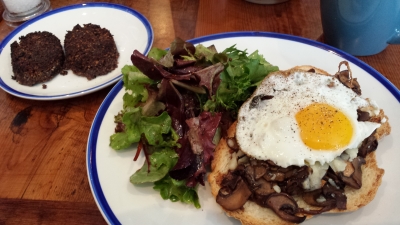 Like mushrooms, red wine, garlic, cheese, runny egg and black pudding? There may just be a dish for you

After starting off with a nice strong cup of English tea — with a little saucer for the tea bag, nice touch — I opted for the Posh Mushrooms: Sautéed mushrooms in red wine and garlic, toasted rosemary focaccia, topped with aged and welsh cheddar, a sunny egg and a side of mixed greens … and extra black pudding. Sorted.

I’d had a similar dish at Spitfire Kitchen in the past, but thought it could have been improved upon slightly. This version at Kitchen On Sixth demonstrated that the mushrooms should be a little smaller and a little crispier, and went really well with the cheese and runny egg.

The black pudding was one of the best I’ve had and also available for purchase frozen. They are also in the process of ramping up their general store.

My Canadian brunch companions both went for the French Toast, and said it was delicious. It was huge though, literally bricks of toast, and one portion could definitely be shared between two. A side of chips rounded off the meal and they were good too.

So, all things considered, we give this place a Brits in Toronto 4/5 stars.

*Bonus points. They just got their booze licence about a week ago so are open TONIGHT for a Christmas Eve bash “until late” and, as you know, it’s hard to find Brit place open late in this hood on Christmas Eve with draft Guinness on tap. Say Brits in Toronto sent you.

Cheers … and a Merry Christmas to all our readers and thanks for your feedback and social media love this year.