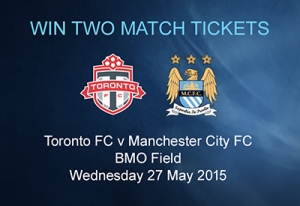 How good is that, eh?

Ever since Toronto FC announced a friendly against THE Manchester City FC on May 27 at BMO Field, Brits in Toronto wanted to get involved in some small way. We love these games where the Premiership is pitted against MLS, in our adopted city of Toronto.

And thanks to our very generous friends at Manchester City FC, we have an exclusive free contest where you can win one of five — yes, five — pairs of tickets to see the match!

How good is that? You’re welcome 🙂

Some of the Brits in Toronto crew attended the Toronto FC vs. Tottenham Hotspur friendly last summer, and let us tell you — whatever your team allegiance — it was an amazing occasion, full of atmosphere and excitement. Tons of fellow Brits there too, obviously.

We have no doubt that TFC vs. MCFC will be exactly the same, and we’re pumped. 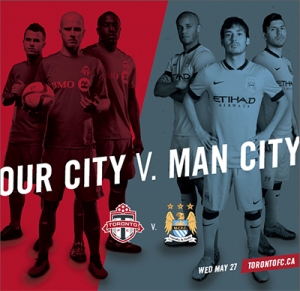 Who will take it? Red blokes or blue blokes? Be there!

So, how can you win the chance to grab a pair of free tickets? Simply click this exclusive Brits in Toronto link, fill out some quick details and a representative from MCFC will pick five winners of two tickets each.

Nothing to lose. And get the chance to be there and see whether the reds or blues prevail …

As Alan Partridge would say, “Back of the net!”