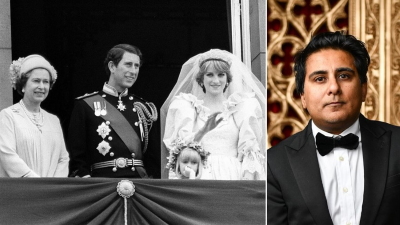 It’s contest time! But first read about what you can win before you decide to go for it or not. Huge clue: you should have some interest in the British Royal Family …

Are you still reeling from #Megxit? Gossiping over the latest season of The Crown? Holding a candle in the wind for the legendary Diana? Join Toronto Star Society Columnist — and avid Royal watcher — Shinan Govani as he breaks down the modern history of the one and only House of Windsor, bringing to life its most colourful personalities, its most opulent traditions and, of course, its juiciest scandals.

Featuring video highlights from royal milestones and special guest interviews with royal experts on both sides of the pond, this special Saturday morning series, unfolding across six weeks from March 14 – April 14, will be a spirited celebration — and clever dissection — of the family we can’t stop watching.

Shinan Govani is a contributing columnist with the Toronto Star and a columnist for Hello! Canada who was once dubbed “the go-to Canadian” by Page Six. Both social chronicler and pop culture decoder, he’s reported from fashion weeks in Milan and Paris and film festivals at Sundance, Cannes and Toronto and his writing has appeared in Vanity Fair, Town & Country and The Daily Beast.

So, do you want to win two free subscriptions for this? Simply rearrange these letters to form the name of a soon-to-be former British Royal: ARRYH

Post your answer and contact name in the comments and/or the Brits in Toronto Twitter feed and we’ll randomly select a winner on March 8 to pass on to the organizer.

The best of British to you all!