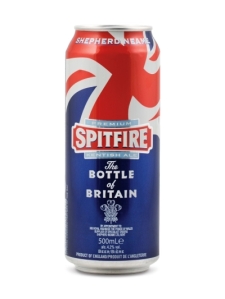 The Bottle of Britain

Bit of confusion in the Brits in Toronto office this morning. The crew were settling down to catch up on the EastEnders omnibus — and we hadn’t even got past the dramatic opening credits drum intro — when there was a knock on the door.

We had no idea what was going on until we realized it was pop star Bez and he’d misheard the theme of our new blog post, Hoppy Mondays. Bit awkward but these things happen.

Spitfire Premium Kentish Ale certainly has the hop quotient. In fact, its website states it has “an infusion of three Kentish hops” and the LCBO goes so far as to say, “Clear deep amber with a dense cream head; on the nose are notes of toffee, grapefruit, honey, crusty fresh bread, dried flower and grassy hops; on the palate it is medium bodied and moderately carbonated, with flavours of bready malt, caramel and bitter hop presence that lingers on the finish.”

Oh you had us at “crusty fresh bread” you smooth talking review writer.

We found it went well with some seafood, actually, and definitely had a fruity touch to it. The can design was what enticed us to try it in the first place and we’re glad about that.

We give this ale a Brits in Toronto 3/5 stars.