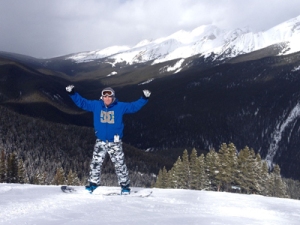 “Snow way I’m gonna get board with this!”

“Shameless self-promotion” was actually uttered by a Brit. Yes, the heavens roiled, old men playing at the pool table in a pub on the moors stopped their game and looked up, and things were never the same again.

But, then again, Ian MacDonald has the talent to create work like this so we’ll let him off.

What, we wondered, brought Ian to Toronto? That’s not a rhetorical question because we asked him in an e-mail and he told us.

I was working for Auto Trader UK when our owners bought Auto Trader Canada from YPG. They wanted to bring over some experience to help grow the business and I was fortunate to be offered a role. I really wanted to have an adventure at that stage in life and I’ve always had huge respect for Canada and heard great things, so I decided to make the move and give it a try.

Well, as I mentioned, I had a job lined up but my wife had to find work in her field which is recruitment. She found most employers saw having experience from a major market like London was a big bonus if anything.

From speaking to friends I don’t think not having “Canadian experience” is as much of a hindrance as it once was perhaps. That is a sign of a city becoming more global and multicultural … which is a good thing.

The best is the size of the city — it has a big city feel, but is easier to navigate and get around than the likes of New York or London, especially on foot. I love how whether I’m meeting with an ad agency, recording audio in a studio, or attending a media conference, wherever I need to get to it’s almost all walkable within the downtown core. Being a Londoner and having spent hours of my previous life commuting, I hate the tube and by extension, any time spent on any subway system!

The worst is the roads downtown and the streetcars if you do have to actually get somewhere fast — the increasing strain of more and more people living downtown with no new transport options is turning it into a bit of a nightmare. Road construction seems to be endless and always poorly planned, and traffic is becoming so bad that I don’t bother to drive into the core anymore, I just walk.

Although it’s nice to be around British people, I am a believer that to really integrate here I need to be open-minded and make friends with new types of people, especially Canadians given I am new to the country.

One of the reasons I moved here was to meet new people and gain new perspectives and experiences, so if all my friends were British I think my overall experience here would be lacking something.

That said, I do enjoy the odd pub quiz organized by Brit groups; it’s nice to indulge in some memories of home for a few hours every now and then. The best place to meet Brits I’ve found is anywhere showing the Premier League soccer games. That’s where many Brits (including myself) can be found on Saturday and Sunday mornings!

Like anything, it is what you make it. Embrace all aspects of your new life, good and bad, as experiences. I find a lot of people struggle with the cold in the winter but I find it interesting and exciting to have so much snow and live with those temperatures for a few weeks — it’s so different to home and, after all, I moved to find something different.

For example, I have made the snow a positive. I have really got into snowboarding since I moved here so I make the best of the snow at Blue Mountain or take a flight out west.

My final tip is don’t be reluctant to modify your pronunciation when needed — I have given up on trying to ask for “water” in my accent and now ask for “warder” which people seem to understand better! This can save you a lot of time and confusion when you learn what the “problem” words are!

Thank you, Ian — great stuff. We’d like to help him with his shameless self-promotion just a tad more, so here’s Ian’s LinkedIn profile if anyone wants to connect on a professional basis, or needs a new motor. 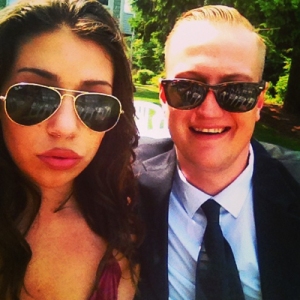 Ian Sandusky and a “mystery stunner” according to The Sun tabloid

Ian Sandusky has only been in the city for six months. But it still qualifies because he’s a BRIT in TORONTO. And we liked the cut of his jib.

Now, let’s see how SUCCESSFUL he is …

Years ago I had planned to move downtown for a job in advertising, but when the recession hit and I was laid off, those plans got put on hold. Earlier this year I met someone special in the city, and that was the catalyst to pack my bags and move to West Queen West. It was a snap decision, but I consider it to be one of the best choices I’ve made thus far.

I used the shotgun approach to get my first interviews, which in turn led to my first job in sales at Front and Spadina. I responded to every employment listing that sounded even remotely plausible — and many that I was completely unqualified for. I figured that if my name crossed enough desks, eventually something would stick … and it did!

Much like everything else, it comes down to persistence. It only takes one “yes” to make all the rejections irrelevant.

The best aspect in my opinion is living in the midst of such a hotbed of culture. There are so many people doing so many innovative things with so much unbridled passion — it’s incredibly inspiring to have that all around you.

The worst is the traffic — driving three blocks can take the better part of an hour, some days … but that’s a minor price to pay for all the benefits living down here provides.

I personally have not made an effort specifically – I’ve only been in the city for six months, so I’m just happy to meet people of any heritage at the moment!

My favourite is the Dog & Bear by Queen West and Dovercourt. Ask Richie for a pint of Beau’s Lugtread, and I’m sure you’ll be hooked.

This city is what you make it. If you focus on the negative, you’ll notice it all around you. If you choose to constantly be curious about Toronto and amazed by what it has to offer, you’ll never want to leave.

Take walks, talk to strangers, try new things — and before you know it, this will be home.