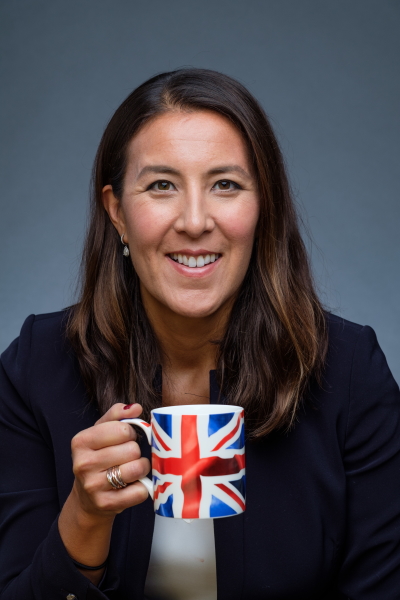 It’s been a while since we did a Successful Brits in Toronto because a little thing called a pandemic kind of threw a spanner in the works. Hope everyone is staying healthy and well.

But we’re back with a bang and a well-known face in the British expat community in Toronto: Amanda Briggs. She runs the Toronto Brit Meetup Group that — now virtually — holds a regular fun pub quiz night. Next one will be Saturday, June 6 so stay tuned for details.

And, if that wasn’t enough to keep Amanda busy, she also sells property via her very catchily-named The British Property Agent, so give her a shout if you’re in the market for a new manor.

Amanda is one of the few Successful Brits in Toronto that we’ve met in person — at last year’s amazing Brits in Toronto/TFC event — so it’s nice to finally feature her on the site.

Take it away, Amanda …

I moved here with my family in 1999 because it was either a move to Canada or Australia. Yes we planned to stay for a while, as we applied to be Landed Immigrants (now called Permanent Resident) before we arrived here. However three months after I moved here, I met someone who lived back in the UK. About three years later, I moved back to the UK and ended up staying for 10 years. I moved back to Canada in 2011 and I am now a Canadian Citizen.

Back then, I just e-mailed my CV to 10 companies that I wanted to work for and waited. Three of them got back to me and invited me for interviews. The lack of Canadian experience didn’t seem to hinder me too much back then; however I didn’t get an equal job here vs. the one I had back home — I had to take a lower level role.

Best: Lots of cultural diversity — you can eat pretty much any cuisine you like! I like that there isn’t much a class system here vs. back in the UK where is it more prevalent. It’s great being so close to lots of North American cities, outdoor life in Ontario is very popular and accessible, and the work/ life balance is better than when I was living in London.

Worst: The winters, trying to get people to understand my accent, food has more sugar in everything, not as many old buildings (vs. London), culture is a bit lacking — the country is only about 150+ years’ old, which is about the age of my flat back in London!

Yes I meet Brits all the time, through my job and social events. I have been running the Toronto Brit Meetup Group for about five years, and we host a very popular pub quiz night every three months (150+people attend), and regular pub nights where Brits and people who have a connection to the UK come to network, mingle and chat about all things British.

Keep an open mind when moving to Toronto. It is a lot harder to find a job than people think it is, and it is highly likely that you will have to take a job that is not what your career or experience relates to … however, a job is better than no job. You can always get another job that is more what you want to do in the future.

I help a LOT of Brits and other expats find a place to live when they first arrive in Toronto. Landlords are very selective when it comes to choosing tenants, and typically if you don’t have a job lined up when you arrive, it can be a lot harder for a landlord to say yes to you.

However there are ways to get around this, and I have a lot of experience in getting a new home for expats fast.

Winters can be a lot colder than people expect, even if they are forewarned! Your UK winter coat is not going to cut the mustard when it is -30 degrees with a wind chill.

The work/ life balance is better here than in London. Lot of opportunities to get out and about after work in the sun or snow.