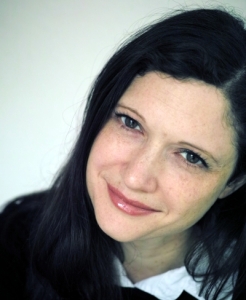 This could be the next famous Blair

We know a few Blairs that are already very famous.

Author Kate Blair could be the Next Big Thing In Famous Blairs. You heard it here first.

Kate is from Hayling Island in Hampshire (although as an adult she lived in Portsmouth, Newcastle, Cardiff, Oxford and London).

Her debut novel is coming out through DCB (an imprint of Toronto publisher Cormorant Books) next month — Transferral — a YA novel set in London. It’s up for pre-order at Chapters/Indigo and Amazon, as well as through local independent bookstores across Canada.

Kate has a website/blog and will be on a panel at The Word on the Street Toronto at Harbourfront on September 27, and signing books there. She is finishing up her second novel now.

In 2001, I came to Toronto on a student working visa as an intern at the Royal Ontario Museum (ROM) as part of my MA in Museum Studies. I was only meant to be here for eight weeks, but had such a good time I stayed for a year, getting some part-time contract work at the ROM and part-time work at Spadina Museum.

After a few years back in the UK as a curator, I kept having vivid and happy dreams where I found myself back in Toronto. So I quit my job and came back in 2005 for a few months and discovered I loved Toronto just as much as I remembered. I also met a guy (as so many of us do).

I emigrated through the Skilled Worker Program, moving here permanently in 2008. I married my boyfriend in 2010, and we have two children. I became a citizen in November 2014.

Because I came as an intern, the “Canadian experience” problem wasn’t such an issue for me.

The bigger problem was the relative lack of museum jobs compared to the UK. So now I work in a different field — for a nursing union — which I really enjoy.

What I love most about Toronto is the sense of optimism and ambition. My friends were mostly students when I first arrived, but they all worked unbelievably hard through their 20s and early 30s, and now many are filmmakers, comedians, actors and writers. That inspired me to chase my own dream of becoming a writer.

Sometimes it can feel like the UK has a more cynical (and often realistic) attitude towards aiming high. I’ve also found it easier to become a part of creative communities in Toronto.

London can be quite exclusive, and without an “in” certain doors are shut that I found wide open here. The accent doesn’t hurt, either.

I didn’t mind the winters at first, because they’re bright and sunny. But then I had children. Double buggies and snow drifts are not a happy combination. My children learned some very bad words last February.

The lack of beer gardens with play areas is another personal gripe, although they’re getting harder to find back home, too.

I don’t have a lot of British friends in Toronto; almost all are Canadian-born or immigrants from other countries. I visit home a couple of times a year, and stay in close contact with friends there, so I don’t seek out Brits here.

There’s such an amazing range of food in Toronto that I rarely find myself missing roasts and chip butties. I fill up on those when I go home.

My advice to Brits in Toronto is to throw yourself into everything that excites you, and to become close friends with someone who has a cottage.